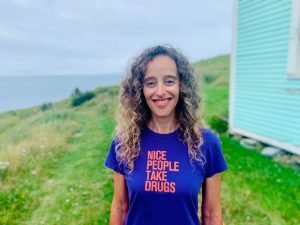 I grew up on the ancestral and unceded territory of the Mi’kmaq People (known, as a result of settler colonialism, as Cape Breton Island, Nova Scotia). I grew up in a middle-class Jewish family, the only Jew in my grade. I faced bullying as a young person not because of my Jewish heritage, but because I was read as queer. Being othered is something that I know.

I first met Narrative ideas about a decade ago when I was working as a harm reduction outreach worker with pregnant and parenting folks in Toronto. A co-worker, whose politics and ethics aligned with mine, encouraged me to attend a Narrative Therapy workshop. At the workshop I remember feeling like I had finally found a language for the ways that I already had been working in the community. I recognized an alignment between the philosophy and ethics of  harm reduction and narrative therapy. A harm reduction philosophy recognizes that our drug laws (i.e. ‘the war on drugs’) which deny people access to a safe drug supply, is largely responsible for the harms caused to people who use illicit drugs. In this way, a harm reduction philosophy, like Narrative Therapy, refuses to locate problems inside of the people who use drugs, and takes into account the social and political context that gives rise to problems like the opioid crisis. It is also similar to a Narrative approach, in that it invites a person to take a position on the kind of relationship they want to have with the drugs they use, and in so doing, positions the person as the expert of their own lives.

After the first Narrative Therapy workshop that I attended in 2011, I got inspired to learn as much as I could about it, and I sought out employment at a public youth mental health agency where Narrative Therapy guided our practice. I had the privilege of working there for almost 8 years as an Individual and Family Therapist, working alongside clinicians who had been practicing narrative therapy for years. I did a lot of learning and un-learning. We did a lot of questioning of taken-for-granted social work practices that I had been taught in university but had never before questioned – as embarrassing as it is to admit to this. For example, I had never before questioned why it was that I had never offered my session notes to the folks about whom they were written, nor invited their input. I had never before considered what might be at stake in doing so, or not doing so. I had never before considered who might be benefitting from these ‘secret file practices’ and who definitely was not. I was captivated by the task of listening for the stories of resistance embedded in a youth’s response to difficulties they were facing. I loved asking young people what their opinion was of the opinion or conclusions that others had drawn about them (especially people in positions of power and authority). I loved asking what I might be deprived of understanding about them if I only knew them in the ways that they’d been ‘storied’ or characterized by people in positions of power/authority. It was an amazing experience to work in an environment where there was a shared sense of values, ethics and commitments among us, and where I witnessed everyday, the ways we all ‘lived’ our values. We all grew our skills in this fertile environment. We innovated. We supported each other’s growth, and each other as people. I am incredibly grateful for what I learned during my time at Oolagen – both from the generous and skillful colleagues with whom I had the privilege of working, and from the young people and families who taught me so much, that continues to influence my practice to this day.

For the past 6 years I have worked in private practice, and in 2018, I began to also work as a Clinical Supervisor at Breakaway Addictions Services (a day and a half/week) and in private practice. Prior to that I did some clinical supervision at Oolagen too.

What I was drawn to about both Narrative Therapy and harm reduction philosophies are that they did not insist on the depoliticizing of people’s suffering. I was also drawn to their rootedness in social justice. In this way, both harm reduction and Narrative Therapy have helped me to avoid the individualizing and pathologizing of people’s suffering. I see Narrative Therapy, not as a technique, but as a world view, or as a way of being in the world, that assists me to live out my social justice values. I don’t come home at the end of the day and take off my narrative therapy hat. Narrative therapy is my home.